from Illuminize by Shabda Hari Das 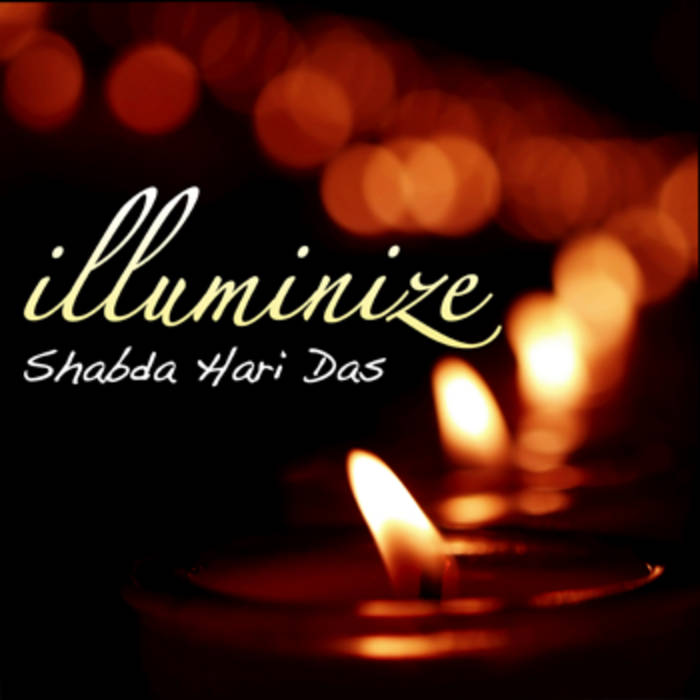 Damodar Astaka, the title track, is a very beautiful prayer that is usually sung/recited everyday in any Gaudiya Vaisnava household during the special month of Karthika (October-November). The recitation of this prayer is usually accompanied by the lighting and offering of lamps to the Lord. The meaning of these 8 verses are the unique pastimes of Lord Damodara (Krishna) which attracts anyone that hears or reads it.

(Found in the Padma Purana of Sri Krsna Dvaipayana Vyasa, spoken by Satyavrata Muni in a conversation with Narada Muni and Saunaka Rishi)

(1) To the Supreme Lord, whose form is the embodiment of eternal existence, knowledge, and bliss, whose shark-shaped earrings are swinging to and fro, who is beautifully shining in the divine realm of Gokula, who I (due to the offence of breaking the pot of yogurt that His mother was churning into butter and then stealing the butter that was kept hanging from a swing) is quickly running from the wooden grinding mortar in fear of mother Yasoda, but who has been caught from behind by her who ran after Him with greater speed-to that Supreme Lord, Sri Damodara, I offer my humble obeisances.

(2) (Seeing the whipping stick in His mother’s hand,) He is crying and rubbing His eyes again and again with His two lotus hands. His eyes are filled with fear, and the necklace of pearls around His neck, which is marked with three lines like a conch shell, is shaking because of His quick breathing due to crying. To this Supreme Lord, Sri Damodara, whose belly is bound not with ropes but with His mother’s pure love, I offer my humble obeisances.

(3) By such childhood pastimes as this He is drowning the inhabitants of Gokula in pools of ecstasy, and is revealing to those devotees who are absorbed in knowledge of His supreme majesty and opulence that He is only conquered by devotees whose pure love is imbues with intimacy and is free from all conceptions of awe and reverence. With great love I again offer my obeisances to Lord Damodara hundreds and hundreds of times.

(4) 0 Lord, although You are able to give all kinds of benedictions, I do not pray to You for the boon of impersonal liberation, nor the highest liberation of eternal life in Vaikuntha, nor any other boon (which may be obtained by executing the nine processes of Bhakti). O Lord, I simply wish that this form of Yours as Bala Gopala in Vrndavana may ever be manifest in my heart, for what is the use to me of any other boon besides this?

(5) O Lord, Your lotus face, which is encircled by locks of soft black hair tinged with red, is kissed again and again by mother Yasoda, and Your lips are reddish like the bimba fruit. May this beautiful vision of Your lotus face be ever manifest in my heart. Thousands and thousands of other benedictions are of no use to me.

(6) O Supreme Godhead, I offer my obeisances unto You. O Damodara! O Ananta! O Vishnu! O master! O my Lord, be pleased upon me. By showering Your glance of mercy upon me, deliver this poor ignorant fool who is immersed in an ocean of worldly sorrows, and become visible to my eyes.

(7) 0 Lord Damodara, just as the two sons of Kuvera-Manigriva and Nalakuvara–were delivered from the curse of Narada and made into great devotees by You in Your form as a baby tied with rope to a wooden grinding mortar, in the same way, please give to me Your own prema-Bhakti. I only long for this and have no desire for any kind of liberation.

“In the month of Kartika (October-November), one should worship Lord Damodara and daily recite the prayer known as Damodarastaka, which has been spoken by the sage Satyavrata which attracts Lord Damodara.” (Sri Hari Bhakti Vilasa 2.16.198)